It's Time to Enter the Ark

Have an aversion to the Virgin Mary, like I did? It’s time to ask why. 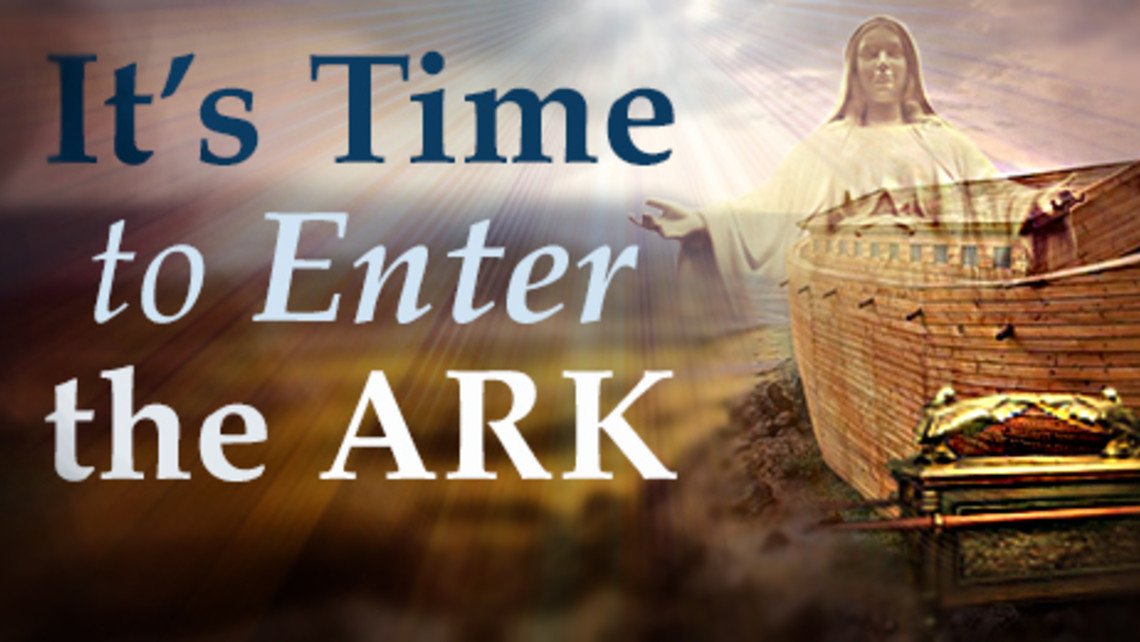 (Edited from blog post March 25, 2016) According to a recent article in the National Catholic Register, March 25 is the traditional Jewish date of creation and Abraham’s near-sacrifice of his son. This same date was believed by early Christians to be the first Good Friday as well as the Solemnity of the Annunciation. Since March 25 is also my birthday, I want to share a few reasons behind an invitation I am likely to extend again and again in the months ahead. Will you join me in the Ark?

A few weeks ago at 3AM I found myself wide awake with the phrase “It’s Time to Enter the Ark” running through my mind. This surfaced as the main theme along my 500 mile pilgrimage on the Camino in Spain in April of 2015 when I asked God the very first day: “What did you bring me here to tell me?”

I did not have a vision. God did not speak to me from a burning bush. God's 'answer' was a steadily growing sense of joyful expectation. I did not know exactly what it meant, only that it had to do with the triumph of the Immaculate Heart of Mary. This “Triumph of the Immaculate Heart” was first foretold almost one hundred years ago in an approved apparition of Mary as “Our Lady of Fatima”. Did you know the name 'Fatima' was also the name of Mohammed’s youngest daughter? Did you know many Muslims hold great respect for Mary under her title: “Our Lady of Fatima? Interesting.

But back to the Ark. The womb of every woman is an Ark of safety for her unborn child. Mary was an Ark of safety for the unborn Messiah as well as an Ark of victory over King Herod’s soldiers when Mary, Joseph, and Jesus escaped into Egypt. God asked Mary to care for and defend the child Jesus. Was she found to be dependable? Yes. So it makes perfect sense that God would also ask her to care for and defend his mystical body on earth.

You don’t have to believe in or feel drawn to Our Lady of Fatima. In fact I want to be clear: Not a single Roman Catholic has ever been obliged to believe in reported apparitions of Mary – even when they have been approved by the Church. This will be news for some Catholics!

A tugging began in my soul that first day on the Camino; a desire to call as many souls as possible to follow Jesus and entrust ourselves to Mary. Instead of fading after I returned home, this 'tugging' has intensified. So whether you are Catholic or not, can we work out our differences later and just be about entering this Ark - like Jesus did?

Why I would ask such a thing? Me. The one who for years resisted any sort of relationship with the mother of Jesus. Do you hold Mary at arm's length while calling her ‘blessed’? You’re better than I was – I never called her blessed. I never called her anything because I did not know why she should hold any importance beyond the fact that she gave birth to Jesus. I was wrong. She magnifies Jesus – so only draw closer to Mary if you want more of Jesus.

Do you call Mary ‘Blessed’ because the scriptures say she is or because you know she is? There is a difference.

Do you follow Jesus? Really? If the Word of God set aside majesty and glory in order to consecrate himself (set himself apart) in this unique way. (Philippians 2: 5-11) Until we follow Jesus this way - giving ourselves in a 'cannot-turn-back' way - utterly and completely into the care of the Virgin Mary, we cannot claim to have begun truly following Jesus.

If you have an aversion to the Virgin Mary, like I did, it’s time to investigate why.
It’s time to ask if you were fed a false interpretation of scripture regarding Mary by some pastor or friend.
It’s time to ask if you will be counted among the other children of the woman clothed with the sun referred to in the book of Revelation: "Then the dragon became angry with the woman and went off to wage war against the rest of her offspring, those who keep God's commandments and bear witness to Jesus." (Rev 12:17 NAB Revised)

It’s time to Enter the Ark.